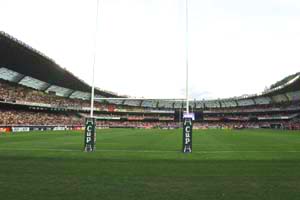 For the third year in a row Biarritz Olympique Pays Basque will host their Heineken Cup quarter-final in Estadio Anoeta. Northampton Saints will attempt to become the first team to defeat the Basque side in the San Sebastian stadium in Spain.

This will be the fourth Heineken Cup knockout game to be played in Estadio Aneota and so far the record is three victories from three. Biarritz Olympique won their quarter-final game against Munster in 2005 and in 2006 they overcame Sale Sharks in the quarter-final and beat Bath Rugby in the semi-final en route to the final in the Millennium Stadium.

London Wasps will play their home quarter-final against Leinster in the 10,000 capacity Adams Park. The London side played their only previous Heineken Cup quarter-final in Adams Park in 2004, when Wasps recorded a resounding 34-3 victory over Gloucester, the year they went on to lift the Heineken Cup in Twickenham Stadium.

The Leicester Tigers V Stade Francais Paris quarter-final will be played at the 16,000 capacity Welford Road. This will be the seventh encounter between these clubs in the Heineken Cup. The English side have played four quarter-finals in their home ground. The home side were victorious on three occasions; in 1997, 2001, and 2002; but Munster tamed the Tigers in 2003 winning by 7-20.

Stradey Park is the chosen battleground for the clash between Llanelli Scarlets and reigning champions Munster. The 10,800 capacity stadium has hosted three Heineken Cup quarter-finals. The only victory for the home side was in 2000 when Scarlets overcame Cardiff Blues 22-3. On the other two occasions the Welsh side were beaten by French oppoenets, Perpignan in 2003, and Biarritz Olympique in 2004.

For further information on ticketing for the Heineken Cup quarter-finals contact the relevent clubs.