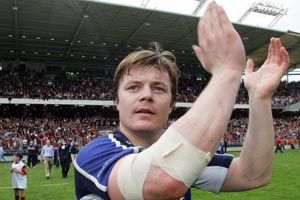 Leinster fans can breath a sigh of relief as Brian O’Driscoll’s hamstring strain is not as serious as first feared.

Irish and Leinster captain Brian O’ Driscoll remains in contention for Sunday’s Six Nations match against France after undergoing a scan on his hamstring strain.


The scan confirmed a mild strain to Brian O’Driscoll’s right hamstring. The injury is not as serious as first feared and O’Driscoll remains in contention for selection against France next Sunday.

O’Driscoll will go through a rehabilitation programme this week before undergoing another medical test on Saturday to see if he is fit for the Croke Park encounter.

O’Driscoll limped off in the 75th minute against Wales after sustaining the damage early in the match and immediately left the Millennium Stadium to receive treatment.

O’Driscoll will go through a rehabilitation programme in Ireland with the team’s medical staff this week. A further medical update regarding the injury will be made on Saturday, 10th February.

Leinster’s Gordon D’Arcy suffered a groin strain during the early stages of the match against Wales.  The injury has responded well to treatment in the last 24 hours. He will also undergo a rehabilitation programme this week and is expected to be available for selection against France.