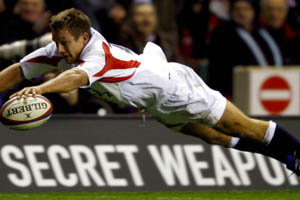 Newcastle Falcons fitness and conditioning coach, Steve Black, has spoken of his delight after Jonny Wilkinson’s successful return to the international stage.

Wilkinson scored 27 of England’s 42 points in Saturday’s Calcutta Cup victory, with Black stating: “Everyone is over the moon for Jonny and for the England team.


“As always he has invested a huge amount of time and dedication in to coming back better than ever, and I think the results of that were evident against Scotland.”

Black insisted that despite playing only 43 minutes of club rugby before his England call, Wilkinson was always ready for the challenge of entering the test arena for the first time in over three years.

“People say he’s only played a small number of games since the World Cup, but in his head he’s played thousands.

“Visualisation plays a big part in the work we’ve done, and while he might not have been out on the pitch as much as he would have liked in the last few years, the work has been getting done behind the scenes and the drive is stronger than ever.

“From the moment he was passed fit by the medics there was never any doubt in my mind that he was ready to come straight back on the pitch. In fact it’s the safest and the best place for him.”

Black also spoke of his excitement at the prospect of Wilkinson back in a Falcons shirt, saying: “This is Jonny’s home, and he is hugely ambitious about playing for the club.

“He will only get better. In my opinion he won’t peak until he’s somewhere around 32, so we should all be excited about the prospect of him representing the people of Newcastle when he comes back from international duty.”