“Massive feat” stands in the way of Stade 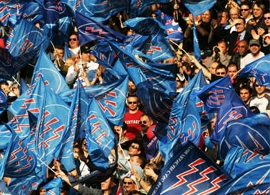 First they face a trip to Leicester’s Welford Road fortress in the quarter-finals, but can be encouraged by the fact they are one of the few teams to have gone there in Europe and won.

Stade Francais lock Arnaud Marchois admitted the scale of the task facing his team.  “It is true that if we do beat Leicester and make it to the semi-finals then we will have a achieved a massive feat,” he said.

“They are a very big, strong team. We hope to be able to set ourselves up for a home semi-final, but we cannot get past the fact this is a massive, massive obstacle in our path.”

Three years ago Stade Francais were in the same group as Leicester, winning 26-13 at Welford Road in the final game to clinch qualification for the quarter-finals. However they had an away game in Munster and went out at that stage.

Again Stade Francais have a emerged from a tough group, but with an away quarter-final. This time defeat in Sale and a draw away to the Ospreys sealed that fate.

The winners of the Leicester v Stade quarter-final will get the benefit of a home semi-final against either Llanelli Scarlets or Munster.

“We were a little disappointed not to get a home quarter-final but we qualified from a tough group so we know we have to be happy,” said Marchois.

“We must start to win more and more away, but Leicester are still a massive challenge. We have played some very hard matches away in the Heineken Cup this season, but regardless of the history and matches in the past we know just how difficult Leicester will be this time round.

“Make no mistake, even if we were drawn away in the semis we will still be very determined to win the game. We prefer to be at home but these are all very seasoned teams who are very capable of winning away games, so I’m not sure there is that much of an advantage any more to having a home draw.”