Munster can bounce back – Kidney 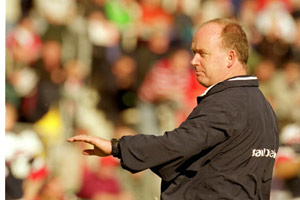 They were the defending champions who had never lost a Heineken Cup tie at their Thomond Park fortress. Leicester’s 13-6 victory ended that proud record and meant the English club topped the pool, earning the home draw in the quarter-finals.

Instead Munster were condemned to a quarter-final at Stradey Park against the second seeded Llanelli Scarlets and the difficulty of the route back to the final was compounded by a semi-final draw which means the winner of that game will have to go to either Leicester or Paris.

.. Munster at least have the consolation they have reached the final the hard way before. In 2002 they won away at Stade Francais and Castres before losing to Leicester at the Millennium Stadium in the final.

“Experience has shown us that has happened in the past, but experience has also shown us that once you have an away quarter-final that is your cup final so we will not be looking past going to Stradey Park in early April,” said coach Declan Kidney.

He knows his first job is to make the players forget the unforgettable and get over that first home defeat.

“It is something which has happened, we will deal with it and move on to the next game,” said Kidney.

“A lot of players are in international camps so they will focus on the Six Nations. When they come back we will have to regroup as best we can and concentrate on the quarter-final stages like all the other teams.”

The Scarlets have decided to play that quarter-final at Stradey Park rather than try to make more money at a bigger ground, such as Swansea’s Liberty Stadium.

“Stradey will be a hotbed on the day,” said Kidney.

“You just have to look at our record against them in the Magners League to see the difficulty for us in this game.”

There are those who have written off the Scarlets chances because of doubts over the strength of their pack. Kidney does not agree there is a weakness there.

“Certainly not the pack I saw at Ulster and Toulouse,” he said. “We played Ulster this year and they have a formidable pack. You don’t go to Toulouse and Ravenhill and come out with six wins if you are a one dimensional team.

“They have a lot of youth and exuberance in their team and their half backs are in top form – they have an all round team who are showing themselves very well.”