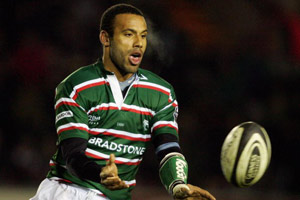 He scored the last minute try when Leicester went to Paris and beat Stade Francais 34-30 in the 2001 final to lift the Heineken Cup. But also there are memories of 2004 when Stade Francais won 26-13 at Welford Road to top the group.

“Stade Francais have been to our place before and beaten us so they are not going to be afraid of coming there,” admitted Lloyd.

Lloyd has happier memories of the 2001 final when defeat was staring the Tigers in the face until an Austin Healy break gave Lloyd the oportunity to clinch an amazing victory.

“I could not have asked for a better day in all fairness,” Lloyd reminisced. “Hopefully I will have a similar game this year.”

Of course Leicester announced themselves as one of the favourites to win the title this year by becoming the first team to go to Thomond Park and win in the Heineken Cup. That victory earned the home quarter-final, while the semi-final draw offers he chance to remain in England all the way to the Twickenham final.

“We created a huge momentum, especially after losing our first game. We could not afford to lose another game and that momentum has snowballed and snowballed,” said Lloyd.

“We are very fortunate to put ourselves in the position of having a home quarter-final. If someone had told us that after we lost the first game at home to Munster then we probably would not have believed them, but we have done very well.

“The forwards were immense in Munster, it was probably one of the best team performances of the year – especially up front, so all credit to those guys.

“It is key to play at home so it is nice to get the home draw in the semi-final, but first we have the home quarter-final where we slipped up last year against Bath so it would be nice to put that right.”

Leicester are aiming to win the Heineken Cup for the third time, something only Toulouse have achieved. Lloyd says they are a new side, but one which is beginning to think it can copy those performances of 2001 and 2002.

“We have got a huge belief. It is a different side to the one which won, especially the first time, we are building a young side,” said Lloyd.

“Beating Munster was a massive step in the right direction in giving belief to the guys who have not won it before, the young guys and also people like Shane Jennings and Leo Cullen who came from Leinster to try and chase European glory, so things are good at the club.”