Munster to do it the hard way 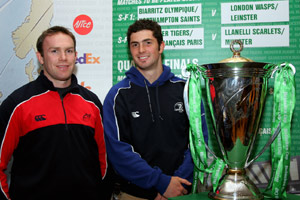 Heineken Cup champions Munster will have to do it the hard way if they are to retain their title as European champions for another year following an intriguing semi-final draw... - 23/01/2007 17:19

The Irish giants already have a tough quarter-final trip to high-flyers Llanelli Scarlets in March, but they must also travel to either Leicester Tigers or Stade Francais in the semi-final if they are to reach the showpiece event at Twickenham on May 20.


But coach Declan Kidney insists MUNSTER are up to the huge task, adding: “We know you have to beat the best once you are in the knock-out stages.

“We’re just delighted to be in the quarter-finals and we will only focus on the semi-final once we’re there because it’s going to be extremely tough.”

LLANELLI SCARLETS confirmed they will host that quarter-final tie at their near-legendary Stradey Park home but assistant coach Rob Jones believes three away wins in the pool stages has given the Welsh region every reason to be confident if they are on the road again for the semi-final.

Jones said: “Our form away from home in this competition has been very good this season. Not only have we won in both England and France but we picked up bonus points as well. However the priority right now has to be Munster.”

The prospect of crucial home country advantage will provide both LEICESTER and STADE FRANCAIS with an extra incentive when they clash in the quarter-finals in March.

Stade Francais lock Arnaud Marchois said: “It would be fantastic to play a semi-final in Paris but we have to beat Leicester first. We have won there before but there were many different players on the field that day and this is a totally different context.”

Spain could host another Heineken Cup semi-final if Biarritz Olympique surpass Northampton Saints to hosts either London Wasps or Leinster in the last four.

BIARRITZ skipper Damien Traille said: “It would be very special not just for the Biarritz supporters but also the Basque people to play the semi-final in San Sebastien. Of course it will be difficult and we must first focus on the quarter-final game.”

LEINSTER’S Rob Kearney insisted the men from Dublin would not fear playing in France following their epic victory in Toulouse last season.

Kearney said: “We got the semi-finals the hard way last year so going to France is not something that will faze us. Biarritz are a great side and it’s something we would relish.”

However, standing in their way are 2004 champions LONDON WASPS who emerged from a tough pool that includes Castres Olympique and Perpignan to make it into the last eight.