O’Driscoll back for Kingsholm test 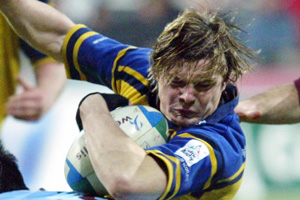 Brian O'Driscoll will be back for Leinster's final push for a valuable home quarter-final when they travel to Kingsholm to face Gloucester on Friday night... - 18/01/2007 09:45

And although the West country giants are out of contention for a last eight place, Leinster coach Michael Cheika expects nothing less than a full-blooded and thunderous encounter.

“Brian will be back for sure and to have players like him and Girvan Dempsey available this weekend is a huge bonus,” said Cheika. “On top of that, Brian Blaney will also be back so we have got something close to a full squad to select from for what is another huge Heineken Cup match for Leinster.

“We have to get a home quarter-final – that has always been our objective and we have put ourselves in a position to achieve that – but right from the start we targeted December and January as big months for us with four Heineken Cup matches and now we don’t want to let ourselves down.

“The reality is that we have not achieved anything more than qualification for the quarter-finals. Sure, we have created the position to progress, but we are only just over halfway through the tournament.

“Getting out of your Pool can be the hardest thing of the lot to do in the Heineken Cup and we have done that but there is still plenty of work to be done.

“And, while Gloucester are out of it for this tournament, we still expect a tremendous match against them.

They don’t need all the clichés of playing for pride or playing in front of their home fans to fire themselves up for a game like this.

“Gloucester are a good team with a lot of quality players and were perhaps a bit unlucky to lose against Agen in France at the weekend. There will be a fair number of the Irish backs against some English backs so it could be some game.

“We will be going all out for the win and going for it with our normal game, it is our style to run the ball. That is our strength and, if we play that way, we are hard to beat.”