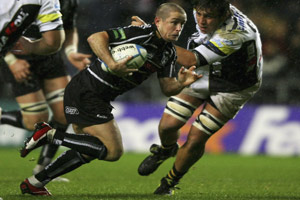 Ospreys wing Shane Williams says his team have to learnt to win big games after losing to Saracens in the quarter-finals of the Heineken Cup. Watch the interview here. - 08/04/2008 10:09

If the Ospreys are to succeed then they need Williams at his sparkling best, but he says they cannot start the game looking for a bonus point.

.. The 22-22 draw against Stade Francais last weekend leaves the Parisians clear favourites to top the group after their final game at home against Italians Calvisano.

The Ospreys could still qualify as one of the top two runners-up if they win at Sale at the weekend and a bonus point would hugely improve those chances.

“It’s such a tight group, one of the toughest groups I feel in the Heineken Cup, and because Stade Francais kicked a penalty at the end we are a little bit behind and need bonus points,” said Williams.

“Not many teams go to Sale and do that, it is very difficult just to go there and win, so we need a massive effort to go there, play well, win and get a bonus point but we have proved this season we are capable of doing that.

“If we can continue the momentum of the second half against Stade Francais then we are capable of it but we cannot start the game looking for that, we cannot think about the bonus point.

“Heineken Cup rugby is difficult whoever you play and Sale are one of the best sides in England.

“They are lacking players with a lot of injuries at the moment, they have been very unlucky, but it is a massive game and they are at home so it is never easy.

“We will go there wanting to win and then look for a bonus point, but it will be very difficult.

“The fact we are still in contention going into these last games shows the Ospreys are getting better with more experience season to season, whereas in the past we have struggled in this tournament now there is a bit more about us.

“Obviously we’re a good side with good strength in depth but there is a bit of expereince coming through as well. We’re going down 10-13 points and we’re not giving up while maybe in the past that has happened.

“The belief is certainly there and we showed that in the way we came back in the second half against Stade.”