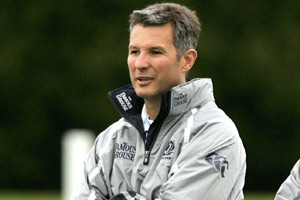 Glasgow coach Sean Lineen says his team can put a much-needed smile back on the face of Scottish rugby if they beat Saracens in their Challenge Cup quarter-final. - 27/03/2007 11:54

Glasgow coach Sean Lineen knows only a win will be good enough and stresses that success is vital for both the Warriors and Scottish rugby in general.

The Warriors earned a bonus point in a 28-23 defeat at Vicarage Road in Round 1 and made sure they stayed in the qualification mix with a 47-17 try bonus point win at GRAN Parma in Round 5.

“This match is huge – for Glasgow in particular but also for all of Scottish rugby, it means a lot to the national game,” said Lineen.

“Perhaps the big thing for us on Friday night will be to match the physicality of the English club game, something they put a lot of emphasis on.

“They have a very strong and formidable front row, which produced all three of their tries in the Round 1 match at Vicarage Road, but we did get a losing bonus point.

“I feel the return is going to be a tight match – and there is the chance the losing team will go through to the quarter-finals as one of the best runners-up – but we want the win and with it the home quarter-final.

“That is why it was important that we had a big, try bonus point win in Italy. It might not have been pretty as our handling was not as good as we would have liked and they defended well.

“We were not clever enough and now we are under no illusions about the quality side we face in Saracens. When you see the quality of the teams in the running for quarter-final places, getting to the quarters would be a major boost for Glasgow and Scottish rugby.

“We had a meeting in Parma before we flew home last weekend as I want the squad to stay fully focused on the huge challenge ahead and I hope we have a big crowd to get behind the team and support them in this vital match.”