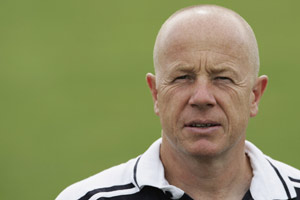 His team have the comparatively easy task at home to Romanians Bucuresti, while the Dragons have to travel to Bayonne in France. The Dragons and Bristol are locked together on 20 points, but the Dragons will top the group if they remain level on point after the final fixtures.

.. “You would have to say they have edged in front of us and are favourites to go through at the moment,” said Hill, whose side lost 17-11 at the Dragons on Friday night.

“We would hope to get a bonus point in our home game against Bucuresti and it will be slightly more difficult for the Dragons to go away to Bayonne and get five points.

Hill admits that getting into next year’s Heineken Cup was not a target he set his side at the start of the season, but now they are top of the Premiership and still in contention in the Challenge Cup he admits they will have to re-set those targets.

“Finishing 5th to 8th in the Premiership was our target at the start of the season, but we will have to sit down at the end of the month and set out sights a bit higher,” said Hill.

“It has been an excellent season so far – none of us would have expected to be where we are in the Premiership.

“We have won games by working very hard for each other and we all have to be playing very well, so from that point of view losing to the Dragons was a good reminder.”