Fiftieth Falcons appearence up for Tait 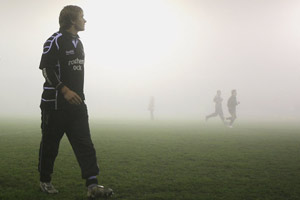 Mathew Tait has completed his move to Leicester Tigers. Tait

Mathew Tait makes his 50th start for Newcastle Falcons in Friday’s European Challenge Cup clash against Brive, knowing that only a bonus point victory will do…


“First of all we need to tighten up and make sure we don’t concede sloppy scores to them, but the main goal is to get the bonus point win because we know how important those four tries are to at least put us in the mixer for the quarter-finals,” said the 20-year-old, who has touched down 18 tries in his 49 club starts.

“Brive have good players in their squad like Terry Fanolua, who has always been strong for Gloucester in the past, so we know it will be a tough game.

“I wasn’t involved in the match over there when we lost quite heavily, but from watching the tapes and speaking to the boys I think they were pretty embarrassed by the performance and in particular the scoreline.”

It is not just a dogged French team that Tait and his men must contend with, however, as the driving north-east wind and rain looks set to play a part in proceedings.

“If the weather stays like this I might just take the field in my suit, because I’m not going to see much ball!” joked Tait.

“It looks like being a pretty forward-dominated game should the conditions be similar to today, but from a backs point of view it just means we need to make the most of whatever chances we get because we know the ball won’t be flung around as much as we normally like to do.”

The Falcons go in to Friday on the back of a morale-boosting victory over Leicester, with Tait saying: “Last weekend has given everyone a massive lift, especially the forwards because that was the best they’ve played in a long, long while.

“It’s given us a lot of momentum for the pack to front up as well as they did, especially against what was Leicester’s strongest possible side, bar maybe Geordan Murphy. It was a fantastic result, and we have to take that confidence forward.”

Praising the Kingston Park faithful for their recent backing, he added: “It’s important to start well and get the fans behind us, because the supporters have been so important in the last two home wins against Sale and Leicester.

“The crowd last Sunday really stepped up a level and the players have all been talking about it during the week because of the lift it gives to everyone, especially in the closing stages when you’re tired and you need that extra boost. We’re very lucky to have such good support, and hopefully that will continue on Friday.”

Refusing to have his attention drawn to the upcoming Six Nations, a fully-focused Tait insisted: “If you’re not playing well for your club then you won’t get picked for your country, so I’m just keeping my head down and not even thinking about the England team.

“Playing well for Newcastle is all that matters. If that then leads on to international selection then all the better, but it’s not in my thoughts at all right now.”