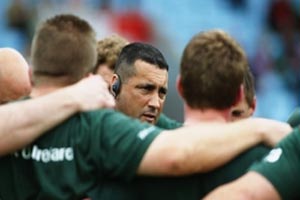 Connacht coach Michael Bradley has warned that they still have a big hurdle to cross if they are to secure a quarter-final place in the European Challenge Cup. - 08/04/2008 10:04

Two of Connacht’s Ireland A internationals have been ruled out for the next four to six weeks and will miss Round 5 and 6 of the European Challenge Cup.


Muldoon (24) and Gannon (23), both of whom have played in all 16 Connacht games this year, will miss the remaining European Challenge Cup games at home to Bath on Friday week and away to Harlequins a week later.

The two will also miss the trip to Murrayfield to play Edinburgh at the end of January but are hopeful they will be back for Connacht’s next game against the Ospreys in the Liberty Stadium on February 16.

If not, they should be available for the visit of Borders on March 2nd.