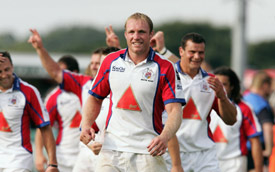 Bristol Rugby club welcome back their captain to the starting lineup

Bristol Rugby club welcome back their captain to the starting lineup, ahead of their Round 5 encounter with the Dragons.

Club captain Matt Salter starts a Guinness Premiership match for the first time since October 15th, the only change to Richard Hill’s starting line up as Northampton Saints come to town.

The flanker is yet to feature in Bristol’s side in this season’s European Challenge Cup. Nevertheless, Bristol are flying high in Pool 1, three points ahead of nearest challengers Dragons.

Salter dislocated his shoulder in the win over Harlequins and only returned to the matchday squad for the first time in the home win over Bath at Ashton Gate on December 27th.

He has been on the replacements bench for the past two fixtures although did get a lengthy run out at Sale on New Year’s Day in place of the injured Joe El Abd.

The sides will clash in Round 5 of the European Challenge Cup with Guinness Premiership leaders Bristol bidding to maintain their unbeaten record in the Pool stages and Dragons aiming to avenge their 11-7 defeat in Round 2.