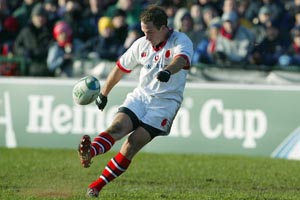 An MRI scan yesterday (Tuesday) revealed that while Ulster out-half David Humphreys has not sustained any broken bones there is some damage to his left elbow. - 03/01/2007 09:50

An MRI scan yesterday (Tuesday) revealed that while Ulster out-half David Humphreys has not sustained any broken bones there is some damage to his left elbow.

Humphreys left the field mid-way through the first half of Sunday’s Celtic League game against Leinster at Lansdowne Road. Ulster confirmed that an MRI scan has revealed a degree of bony bruising from the impact and significant soft tissue damage.


It is highly unlikely that this season’s leading scorer in the Heineken Cup will be fit to participate in Ulster’s Round 5 and Round 6 Heineken Cup games. However, with intensive treatment and rehabilitation there is an outside chance Humphreys could be fit for the away Magners League trip to the Ospreys at the end of January.

Humphreys has scored 52 points in Ulster’s Heineken Cup campaign this season, ahead of Ronan O’Gara (51 points) and Stephen Jones of Llanelli Scarlets (49 points).