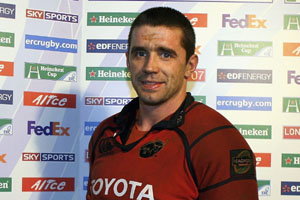 Alan Quinlan will serve the three-week ban imposed upon him by a Six Nations Disciplinary committee this week. - 21/11/2008 17:40

An independent Appeal Committee meeting in Dublin today (Wednesday, 3 January) has adjourned the appeal lodged by Munster on behalf of their player Alan Quinlan.

The appeal was against the six-week suspension imposed by an independent Disciplinary Committee on 20 December, 2006, following Mr Quinlan’s citing in the Round 4 Heineken Cup Pool 4 match against Cardiff Blues at Thomond Park on Saturday, 16 December.

An independent Disciplinary Committee, chaired by Christopher Quinlan (England) and also comprising Bruce Reece-Russel (England) and Iain Goodall (Scotland) had heard the citing lodged by the Citing Commissioner for the match, Alan Mansell (England). They found that Mr Quinlan had been in contravention of Law: 10.4 (b) – Stamping or trampling: A player must not stamp or trample on an opponent.