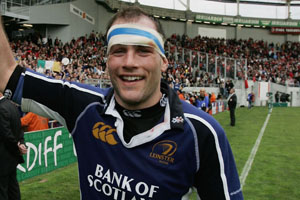 Leinster Rugby announced that Felipe Contepomi has signed a new two-year extension to his contract. - 02/01/2007 11:21

Leinster Rugby announced that Felipe Contepomi has signed a new two-year extension to his contract.

Argentina international out-half Contepomi, 29, joined Leinster in the summer of 2003, and has made 65 appearances to date for the province scoring 664 points and was last year named as the Bank of Scotland (Ireland) Leinster Player of the Year.


He was the top points scorer in the 2005/07 Heineken Cup tournament accumulating 131 points, when Leinster made it to the semi-finals, beaten by provincial rivals Munster in Lansdowne Road. Contemponi has earned 20 Heineken Cup caps so far, including five caps for Bristol Shoguns.

Leinster coach Micheal Cheika is delighted the Contepomi has extended his contract with Leinster.

“There aren’t that many better players out there and it’s not just about the qualities that he brings as a player. He’s an important person to have around. He shows great leadership.

“He’s finished his medical studies in May so I’m more worried about the fact that I’m going to see more of him around full time! I might have to get another office somewhere else!

“I hadn’t seen all that much of him before I came here except playing as a Puma in what is a more forward dominated game. He gets into the category of great players and he’s very passionate about how we want to play the game.”

Leinster will be glad to have their star kicker back to full fitness, following his recent knee injury, for the upcoming Heineken Cup games against Edinburgh in Donnybrook and away to Gloucester for Round 6.