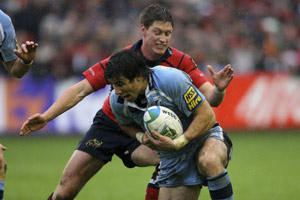 Dai Young was disappointed after Cardiff Blues went down 22-12 to Munster, but said his side still has a point to prove for Saturday’s return in Limerick…

The Blues coach knows that quarter-final qualification will be an up-hill struggle as his sie have now lost two of their home games, but Young says his side will go hard at Thomond Park on Saturday.

“Munster are the best team in this pool although there is not much to choose between them and Leicester Tigers,” Young said.

“We are a proud bunch and we will be going all guns blazing to get the result next week.

“It’s going to be another massive challenge for us.

“While Munster are favourites to win this pool now, we would love to have a hand in who eventually qualifies.

“At the end of the day, Munster were far more clinical and ruthless then we were, the game slipped away from us, but there was no disgrace.”

In contrast, Munster are flying high at the top of Pool Four with three wins, two of which have come at Leicester’s Welford Road and now Cardiff.

“It was a good win for us, we hadn’t beaten Cardiff in any of the last three previous outings, so that was pleasing,” said Munster coach Declan Kidney.

“But next week is a long, long way from being a sure fire certainty for us.

“Cardiff have come a long way in the last year and they will travel  to Thomond Park with nothing to lose – we can’t afford to take them for granted.”