O’Gara delighted with result – but not peformance 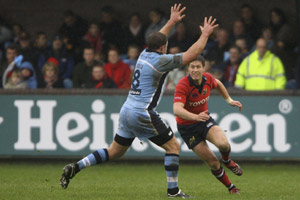 Ronan O’Gara hoisted his Heineken Cup tally to 803 points as he notched 17 points in reigning champions Munster’s 22-12 win over Cardiff Blues, but the record breaking outside half still wasn’t happy…

The Irish province may have equalled Leicester Tigers’ 11 match winning streak, and notched a record breaking sixth win on the road in the tournament, but appalling conditions made it a far from vintage display.

“We are delighted with the result, but not so much with the performance,” was the O’Gara verdict.

“We never hit the heights of some of our better performances, although to win away from home by 10 points, and deny Cardiff Blues a bonus point, is hugely satisfying.

“I don’t think we reache ethe standards of top European rugby and we know we’ve got a lot to work on before next week at Thomond Park. The only good thing is that it is always easier to work hard when you are winning.

“It wasn’t a pretty performance, but we are in a results driven business and we have won three out of three so far.”

“Cardiff holds special memories for all the Munster players and their fans and winning the Heineken Cup at the Millennium Stadium last May has done wonders for the confidence of the team.

“At times I felt we were cruising in the conditions and that won’t do. We need to be more critical and demanding of ourselves.”

Back row man Alan Quinlan picked up the Heineken Man of the Match award and both he and fellow pack member David Wallace notched their 50th Heineken Cup appearances to qualify for an ERC Elite Award.

“This is probably the best start  we have had in the Heineken Cup and we are in a good position. But we are under no illusions just how tough the next three matches are going to be,” said Quinlan.

“We have no divine right to win these games. It is going to be very difficult against Cardiff Blues next weekend and we kinow that we always have to lift ourselves for the Heineken Cup.”