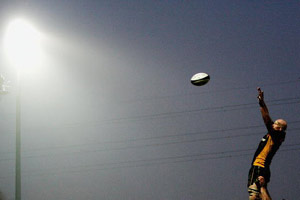 European Challenge Cup runners up Worcester Warriors have brought in experienced referee Hugh Watkins to consult on the implementation of the ELV's - 14/08/2008 08:45

Nicolas Le Roux is away with the French Sevens squad and is replaced by Thinus Delport at fullback.


Mark Tucker is still out with a back problem so Gary Trueman starts on the wing.

Scrum half Matt Powell is preferred to Andy Gomarsall.

Hooker Andre Van Niekerk returns to the starting line-up with Chris Fortey named on the bench.

England Under 21 Grand Slam winner Richard Blaze is named as a replacement.