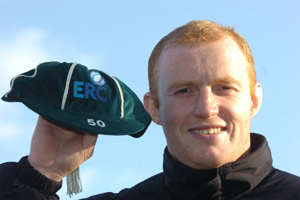 He becomes only the 23rd player to win an ERC Elite 50 Cap and the first Arms Park player to reach the landmark.

Speaking of his achievement David Young – Cardiff Blues Director of Coaching said “Throughout the lean years Martyn has always performed at the highest level and it’s a measure of his consistency and durability that he is the first Cardiff Blues player to reach 50 games in the Heineken Cup.

Williams was understandably delighted to reach the 50 cap mark. “It’s a nice milestone to achieve but it doesn’t feel like I’ve played that many games in the tournament,” he said

“It couldn’t be a better game to achieve the honour because it’s a massive match for everyone in the region.

“We haven’t been in the quarter-finals since we lost at Gloucester in 2001 and we’d like another big crowd to help us in our quest to go through. They’ve helped make the difference in our last two home games.