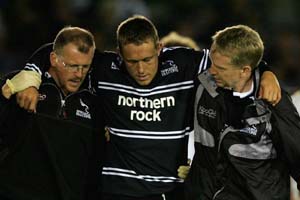 Newcastle Falcons fly half Jonny Wilkinson has sustained a grade two injury to the medial collateral ligament of his right knee. - 29/11/2006 12:07

Newcastle Falcons fly half Jonny Wilkinson has sustained a grade two injury to the medial collateral ligament of his right knee.

Wilkinson left the field five minutes in to Friday’s 20-19 victory over Worcester Warriors, and underwent a scan on Saturday morning.

Falcons director of rugby, John Fletcher, said: “The scans have confirmed what we initially thought on the night, and at the moment we’re probably looking at Jonny being out for somewhere between four and eight weeks.

“We are bitterly disappointed for him because he had finished last season so well, had an excellent pre-season and then started brightly again this time round.

“It was a freak accident really, but those sorts of industrial injuries are not uncommon in rugby and we look forward to having him back again fully fit.”