We will do it our way – O’Connell 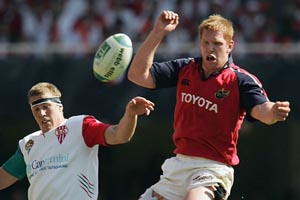 …when they collide with Biarritz Olympique in the 11th Heineken Cup final at the Millennium Stadium on Saturday (3.00 pm).

And Paul O’Connell – runaway back-to-back winner of the Heineken Cup Man-of-the-Match awards in the Irish province’s quarter-final and semi-final triumphs – is adamant Munster will stick with their tried and tested approach.

“Our approach doesn’t change for any game,” said the Irish lock who has been in such imperious form. “I could use loads of clichés to describe what I’m talking about but you stick with what works.

“So we’ll go out there with the same frame of mind as we did in the semi-final and the quarter-final. You just keep doing the same thing over and over again – I suppose you could say that it’s a case of familiarity breeding success.

“However, it is very exciting to be playing in another Heineken Cup final.  I find that as I become more experienced it becomes easier to disconnect yourself from all the build-up back home and treat it like any other game.

“I mean, you can’t miss the importance of the game at home but you have to use all of that correctly in your preparation and I don’t get annoyed when people ask about any emotional scars from our previous finals, that sort of thing doesn’t bother us.

“There are a few lads involved on Saturday who may not have another opportunity to win a Heineken Cup and those players are as focused as you would possibly want.

“We are fortunate at Munster to have a ridiculously motivated bunch of players and no-one can ever say that we haven’t given everything in every match and, just like the semi-final, we will give it everything in the final.”

Biarritz Olympique are through to their first final after falling at the semi-final stage in the past two tournaments and O’Connell is wary of the challenge they pose.

“We certainly rate them very highly,” he said. “What impresses me about them is that they can play both games.  In some games it is necessary to play it all up front – and they can do that. Then in other games they’ve let it out wide and given themselves great width. They can play that percentage game – and that makes them very dangerous.”

The Millennium Stadium promises to be a sea of red Munster fans and O’Connell added: “Our support is well documented and this year they have again been incredible for us – everyone knows that they’re the best supporters in Europe.

“We are certainly very aware of the role they play for the team and I think they realise that. To see so many make the trips to the UK or France digging deep into their pockets to support us – well, it has a huge effect.

“It puts you under pressure to perform when you see what sacrifices they’ve made but it’s a good pressure.  It makes us play better when we hear them singing.

“When you think about the injuries we’ve had this year the fact we’re here at all shows the strength of rugby in this province.  Not many teams can lose the likes of Frankie Sheahan and still be around but then Jerry Flannery came through for us and has been one of our best players this year.

“Barry Murphy is another one who came through to become the tale of the year – only for him to break a leg.  But yet the province still marches on and I’m very proud of that.”