Wasps check out the competition 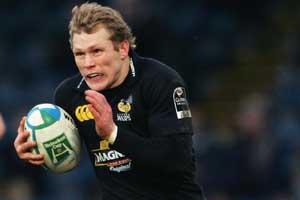 England's Josh Lewsey hopes this weekend's games can live up to the Heineken Cup reputation as the best club tournament in the world. - 18/04/2007 14:24

Wasps were drawn in Pool 1 of the 2006/07 Heineken Cup competition, with French teams Castres Olympique and Perpignan, and Italian Champions Benetton Treviso.

‘Each game is a winnable game,’ he said of the Pool 1 prospects, ‘but if we take our foot off the pedal in any of them, there is not an easy game in it.

‘The Italian Champions are just as much a force to be reckoned with as the French, particularly when they are at home.

‘The Italians have a reputation of never, ever giving in, and never being beaten before the kick off – and Treviso are no exception.’

Wasps’ supporters will also be smiling at the prospect of three great away trips between now and the end of January. Edwards is with them in that too!

‘The draw represents three great trips for our fantastic away supporters. Lets hope we get as many people going as we have in previous years.

Wasps’ opponents this year all have a long tradition in the Heineken Cup, and indeed Wasps have met both Treviso and Perpignan in previous competitions, though the Londoners have never played Castres in European competition thus far in their history.

Treviso qualified for the Heineken Cup competition every year from 1995-6, with the exception of 2000-01 and 2002-3, but have never progressed beyond the Pool stages. They have previously met Wasps twice, in Pool 2 in 2001-2. The sides shared the spoils, each winning their home game, but neither team progressed to the quarter-finals.

Notable former alumni of Treviso are Michael Lynagh and former Wasps man Peter Richards, who played at scrum half for Treviso against Wasps in the 2001-2 competition. Their most experienced player comes in the form of legendary Italian scrum half, Alessandro Troncon.

Perpignan have the most impressive CV of Wasps’ three opponents in Group 1. Having competed in every competition since 2001-2, the Catalans reached the semi-final in 1998-9, were losing finalists to Toulouse in 2002-3 and most recently reached the quarter-finals of last year’s tournament, where they lost to eventual winners Munster.

Wasps travelling supporters will long remember the experience of playing at Perpignan after meeting them in the pool stages of the 2003-4 competition. Wasps won both games and progressed from the pool to win the Cup at Twickenham in May 2004.

The group is completed by Castres Olympique. Having competed in five Heineken Cup tournaments, Castres recorded their best result in 2001-2, when they reached the semi-finals, where they were beaten by current Heineken Cup Champions, Munster. Last season Castres met Munster again in the Pool stages, though whilst Munster went on the take the trophy, Castres did not progress beyond the Pool stages, winning only one from six matches.

Though Wasps have no competitive history with Castres, many supporters will be familiar with the club, and may even have watched a game or two to keep an eye on former Wasps’ players Paul Volley and Mark Denney. Both joined the French team from Wasps in 2004-5, though both have since moved on, Denney to Bristol the following year and Volley to Harlequins this summer.