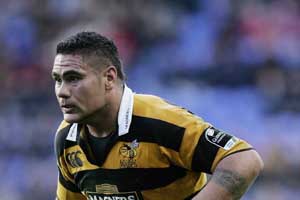 Glasgow Warriors have signed Samoan prop Justin Va’a from London Wasps. The front row forward, who has won seven caps for his country, will join the Warriors on a two year deal.

He joined London Wasps, making seven appearances (five starting, two from the bench) and scoring two tries, in December 2005 from Upper Hutt RFC in Wellington, New Zealand. He has also played club rugby for Wainuiomata and NPC side Wellington.


He started his rugby career playing rugby league, representing Wellington at U16 and U18 before switching to rugby union in 1999.

Following his switch, He was selected for the Wellington Academy in 2000 and represented the Wellington Colts side in 2001 before progressing to senior rugby.

Although born in New Zealand he qualifies for Samoa through his father and chose to play his international rugby for Islanders.

He said: “I’m very excited about the move and can’t wait to start fresh with a new club. I’ve had a visit to Glasgow and met with the coaches and I’m really pleased with the plans of what they’re wanting to do looking ahead as a club. While I’m still very keen to play for Samoa, particularly with the World Cup coming up, my main goal is definitely playing for Glasgow.”

Sean Lineen, Warriors head coach said: “He can play on both sides of the scrum so he’s a great asset to our front row play and I’m sure he’ll fit in very well here at Glasgow.”