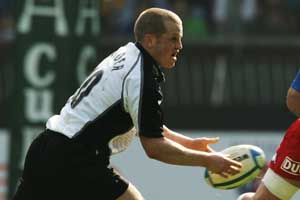 Fly half Dave Walder has signed a three-year contract with Heineken Cup side London Wasps.

The North Easterner joins Wasps seven years after making his Newcastle debut in 1999. His Falcons career that saw him notch up 110 appearances for the club as well as winning 4 international caps following his England debut in 2001.


Walden will have the opportunity to build on his European experience, with 23 caps in the European Challegne Cup and a further 11 Heineken Cup caps to date.

London Wasps Director of Rugby Ian McGeechan said, ‘Dave is an important addition to the squad, giving us experience and depth in the No 10 position and as a reliable goal kicker.

‘He is a talented player and a long term acquisition for us, so we want to spend a bit of time developing the undoubted potential that he has.’

Walder said, ‘ I am really excited about my move to Wasps. It’s a fresh start for me and I am looking forward to the new challenges that lie ahead.

‘Wasps set up, in terms of conditioning and development of players, is second to none, and with their help I think I can improve as a player.’