Vickery moves from Gloucester to wasps 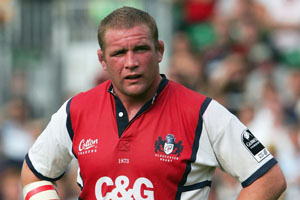 World Cup winner Phil Vickery has signed a three-year contract to play for Heineken Cup side London Wasps from the start of next season. - 29/11/2006 12:28

World Cup winner Phil Vickery has signed a three-year contract to play for Heineken Cup side London Wasps from the start of next season.

The England man has put pen-to-paper on a three-year deal that will tie him to the London club until 2009.

Following eleven years with Gloucester Rugby, Phil Vickery has amassed 40 appearances for the club in nine seasons at European level in the Heineken Cup and the European Challenge Cup.

Vickery, who left Gloucester earlier this month after failing to agree a new deal, has been sidelined since the start of the year after undergoing a third back operation in four years.

The 30-year-old tight head prop has rejected speculation suggesting his back problem will curtail his career, and is confident that his work with Wasps’ medical and conditioning staff will ensure he is in good shape to start next season.

“My priority is to regain full fitness. I’ve got a rehab programme to complete, with the aim of taking a full part in pre-season training.”

“I just want to go out and play like I know I can play. I think the Wasps style of play will suit me. I think I can offer a lot on the field and offer a lot off the field as well. At the end of the day, I’m just very excited about getting out there and showing people what I can do.”