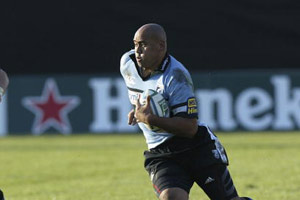 Justin Marshall played alongside Lomu in 40 tests for the All Blacks as well as coming up against him annually in both Super 12 and the domestic NPC competition in New Zealand. Lomu has returned to action this season after battling back from a devastating kidney disorder and injury. However despite his threat to the Tykes ambitions, Marshall is delighted to see his former team mate back out on the field.


The 32-year-old scrum half commented, “It is great to see a player of Jonah’s ability back out on the field playing again, it is good for the game to have a player like him involved. I had the privilege of captaining Jonah for the All Blacks and he is one of the most dangerous wingers ever, it will certainly be strange coming up against him on Sunday.

“He is a brilliant guy and we are still good friends. Anyone who knows him will be so pleased to see him back out on a rugby field after everything he has been through in recent years. It is testament to the kind of guy Jonah is that he his back playing. He is so determined and driven to succeed that never playing again was probably not an option for him. He certainly does not have to play the game to prove anything to anyone or for financial reasons, he has come back because he loves playing rugby.”

Lomu scored 37 tries in 63 tests for the All Blacks after bursting onto the scene in the 1995 World Cup in South Africa when he memorably scored four tries against England in the semi final.

Marshall believes that Lomu in his prime was unstoppable. He added, “At his best before his illness he was the best winger I have ever seen. He was unstoppable when he was in full swing. There is no doubt he will pose a threat to us on Sunday at Headingley Carnegie especially as he has come in for some criticism recently. He will be motivated to show people what he can do, which is bad news for us but we will have to make sure that we are ready for him.”

The Heineken Cup campaign this season for Leeds has been a roller coaster ride but they now have a great opportunity to reach the Quarter Final for the first time ever in the club’s short history. Looking ahead to the game, Marshall added, “This is a brilliant opportunity for us. The fact that Cardiff and ourselves are in a position to qualify sets the game up brilliantly. Hopefully it will be a nice day, there will be a big crowd and the game does the occasion justice.”