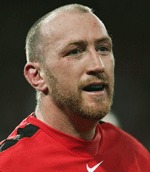 Came into training yesterday and there was pandemonium. The boys were hopping mad, telling stories of things that had happened to them during the night. Over in the corner of the dressing-room, Freddie Michalak look shattered but was laughing away to himself all the same. He’d had a long night…..

It all goes back to our trip to Llanelli last weekend. On arrival in Cardiff airport, one of the boys had got a hold of Freddie’s bag and emptied the contents onto the carousel. He wasn’t happy about that.

Before the match some of the boys put deep heat in Freddie’s boots and he had to go searching around for another pair. He was even less amused about that. Finally, when we arrived back in Blagnac Airport on Saturday night, his bag had been nicked and reported as missing. By now, Freddie was fairly pissed off.

The lads feared there might be serious repercussions but they figured they might be safe as he wouldn’t know who to blame. Freddie narrowed it down to four possible culprits: Yannick Jauzion, Yannick Bru, Xavier Garbajosa and Jean-Baptiste Elissalde.

A warning came on Monday evening at training while we were doing some scrummaging. Freddie has a mate in Domino’s and suddenly there was a motorcycle delivery man driving across the pitch delivering three pepperoni pizzas in the name of our forwards’ coach Serge Lairle and a bill for €35. Nobody paid him but we had to have a slice of pizza before settling down to do some more scrums.

Freddie’s dad is a builder, so Freddie headed off into the night _ late into Monday night _ in his car; his boot filled up with ready-made cement, concrete bricks and bags of dirt and rubble. He started off at about 2.00 at Garba’s house and began building a wall. He’d reached about two layers of bricks but because it was a very foggy night, he began to think he had the wrong house and instead went next door where he built a five foot wall.

Garba came out yesterday morning and saw an unfinished two foot wall outside his front door but then saw the trail of footprints through the garden to his neighbour’s house leading all the way to a five foot wall in front of his neighbour’s door. He said nothing and quickly hopped in the car to go training.

Next, Freddie drove to Bru’s house and painted ‘Goby’ _ Yannick’s nickname _ in big writing all across the front wall of his house. He then drove on to Jauzion’s house and yanked up Jauzion’s car, putting four cement blocks underneath the car. He drove on to Elissalde’s house and covered his car in muck and rubble.

Freddie had been a busy boy and looked whacked yesterday, but he looked happy too. “Listen lads,” he said to them, “I’m a single lad with no kids and no responsibilities. Do what you like, but I’ll always get you back.” This one could run.

Well, we duly secured our home quarter-final. There was only one change to the starting team last Saturday against Llanelli; with Romain Millo-Chluskey coming into the second-row for my good self.

I couldn’t train all week due to a stamping on my leg in the game against Wasps. Guy Noves named the team on Wednesday and called me aside afterwards and asked me if I thought I’d be available to travel over on Friday and if I had to would I be able to do a job. I said “oui” to both questions. “Pas de problem.” I wasn’t entirely sure in my own mind but I didn’t want to let the team down.

We headed off early on Friday and when the coach drove up to our hotel in Llanelli, the Best Western, Alfie said: “oh no.” After a while, I realised what he meant. It was more like the Worst Western in Wales.

Lunch in the function room was rock hard pasta with some meat and a dessert which no-one could figure but which Alfie told us was semolina. Later on that night after our team run in Stradey Park it was back to our Best Western restaurant for dinner.

The room was like something from the 1920s, disco lights and cobwebs everywhere. More rock hard pasta and chicken. The French boys didn’t touch it. After the meal, we sat down and watched the Clermont Auvergne-Leinster match with updates of Stade Francais v the Ospreys, but both games were pretty much over by half-time so I headed off to my room. How do I describe my room? If you’ve ever seen Only Fools and Horses, and the apartment that Del Boy and the grandfather share it would give you a good idea. It even had a small bar counter in the corner, with boxes and bits and pieces piled up in another corner.

The curtains had big circles in them and looked like something from the 1950s. It wasn’t exactly 21st century. Myself and Alfie were looking at tv and just laughing at ourselves and the whole scene.

On the morning of the match Guy Noves reminded us that we hadn’t secured a home quarter-final yet and to do so we’d have to win and probably get a bonus point as well. As it was a 1.00 kick-off we got up for a walk and a stretch at 8.30. breakfast was at 7.00, but no-one got up for that.

Lunch was at 9.15. It reminded me of a scene from D’Unbelievables when they had the dinner at 8.30 “to get a good run at the day.” No change in the food. More rock hard pasta and some kind of meat _ beef, pork, whatever _ and no-one could figure out what it was. Most of the boys just had some fruit and yoghurt, and I had six bananas as my pre-match lunch at 9.15.

I’d have to say it was the worst hotel I’ve every stayed in throughout my career as a rugby player. I was getting worried too about the boys’ mental state. I could hear a few of them giving out about the food and the last thing you’d want to do is give French boys an excuse. And let’s just say there were an awful lot of excuses.

So I launched into my usual speech before an away game. “Pas d’excuses aujourd’hui.” Great hotel, great food? The guys were just laughing at me and inside I was thinking for once I agreed with them.

Watching the match from the sidelines it was like watching the Baabaas against the All Blacks in Cardiff in 1973. There were tries from the first minute to the last. It was as if the two sides had got together in the dressing-room beforehand and decided: “let’s put on a show for the public.”

Warming up or stretching in the in-goal area during the match it was funny to hear the Welsh accents shouting out: “How’s the bar going Trev?” or “How’s Paula and the kids?” The other six subs were looking at me and wondering what was going on and for once all I could do was smile and say nothing.

I enjoyed watching the game, and felt the lads were in control, that at any stage they could move up the gears, but we were torn to bits by Guy Noves in Monday’s video session over our defence even though he congratulated us on getting a home quarter-final.

We have two free weekends without a game but although we’ll be ticking over with French championship matches between now and the quarter-final, and will get the boys back for five or six days, it’s tough for the coaches. It’s the same for Leinster of course.

So we’ll just be hoping and praying that the guys stay injury free. The Midi-Olympique newspaper ran a survey last week into player injuries and said that the 80% risk of an injury in a club match rises even more at international level.

Watching Munster and Leinster win over the weekend I would have to say they were two of the best Irish performances in the ten years of the Heineken Cup, and it’s great that Munster have produced some good, quick, young and home-grown backs.

On the way back and up until the Bath-Leinster match, the boys had mentioned other teams such as Sale as potential opponents but no-one had mentioned Leinster. A few of us were in the bar watching the game and when Sky flashed up the quarter-final pairings with Toulouse v Leinster I nearly choked on my bacon and sausage. I still stay in regular contact with a lot of the boys and I suppose, after avoiding them for three seasons here, it was bound to happen eventually. Whatever happens, it will be a great weekend.

Obviously the phone hasn’t stopped ringing, with enquiries about planes, hotels, training, taxis, restaurants, bars, shops etc. My message box is full and the mobile is liable to explode. For all those wanting to make contact, could I ask that they please stop ringing me. Just contact Collette Buckley at www.dedanu.com and she’ll genuinely do her best to help you with all enquiries.

(In an interview with Gerry Thornley)