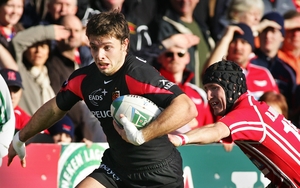 For the fourth consecutive year, reigning champions Toulouse will host their quarter-final match in the 37,000 capacity Le Stadium in the city of Toulouse. The top seeds will play in their eight Heineken Cup quarter-final on Saturday, 1 April in front of another bumper crowd. Toulouse boasts an impressive unbeaten home quarter-final record, having lost only one of their seven quarter-finals, which was away to Ulster in 1999.

This is the fifth time that Leinster will meet Toulouse in the Heineken Cup. With four wins in their favour, the French side will have their sights set on a record eight semi-final.

Leinster‘s recent form in the latter stages of the Heineken Cup will inject confidence into the team that experienced fluctuating fortunes during the Pool stages of the tournament. An inspired performance, led by their captain Brian O’Driscoll, secured Leinster the final place in the quarter-finals and the blues fans are expected to travel in their thousands for this clash of two exciting teams.

Tickets are now on sale on-line from Toulouse. Click here