Toulouse And Munster Chase No 8 Last 8 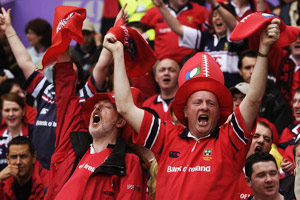 But while Toulouse have gone on to claim European club rugby’s most coveted title a record three times from four final appearances, Munster – twice beaten finalists – are still searching for the ultimate honour.

Nine of this season’s Heineken Cup teams – Sale Sharks, Saracens, Leeds Tykes, Bourgoin, Ospreys, Glasgow Warriors, Newport Gwent Dragons, Benetton Treviso and Rugby Calvisano – have never reached the last eight. But the Sharks are setting the pace in Pool 1 with 18 points as Jason Robinson’s team and Pool 5 table-toppers Bath Rugby (19 points) are the only teams who can still boast four wins from four.

It means the Sharks certainly have their quarter-final destiny in their own hands as they bid to make the knock-out stages for the first time while Saracens are second in Pool 4 with 12 points and facing a massive game at leaders Biarritz Olympique in Round 6.
In the 36 quarter-final matches played so far, French clubs have claimed 28 of the 72 places; English sides 20; Welsh sides 12; Irish teams 11 and Scotland one.