Ton up for Leinster duo 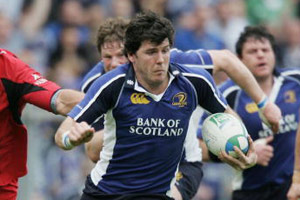 Horgan is the only change to the side that defeated the Llanelli Scarlets 30-22 last weekend.

He returns to replace Rob Kearney who has been named amongst a strong replacements bench that will be reduced closer to kick off and includes Eric Miller, Niall Ronan, David Blaney, Ronan McCormack, Emmett Byrne, Brian O’Riordan and Kieran Lewis.

The side will be captained by Brian O’Driscoll who partners Gordon D’Arcy at centre. In the pack, Reggie Corrigan lines up alongside Brian Blaney and Will Green while O’Kelly will be partnered by Bryce Williams in the second row.

Speaking to www.leinsterrugby.ie Shane Horgan commented: “To reach 100 caps is something that I never thought of achieving when I started playing. I remember my debut against Ulster in Donnybrook in 1998. I was thrown in at the deep end and I was still quite young.

“Even though we lost that game I really enjoyed the experience and it was only then that I realised that it was the first steps on a ladder.

“I’ll always be grateful to Mike Ruddock and Jim Glennon who were really supportive of me in my early days and who took a chance on a guy who didn’t come up through the conventional channels.

“I do have a number of highlights over the 99 caps to date. Winning the Celtic League was special and we played great rugby that year under Matt Williams. This year has been the most enjoyable for me personally because of the philosophy and attitude of the coaches which has allowed the players to express themselves. I have also had a lot of support from friends and family over the years which I am grateful for.

“Leinster v Munster games are always hugely competitive. They’re a privilege to be involved in, particularly this weekend’s game because it’s ‘winner takes all’ and because it’s such a unique one-off game. It’s hard to compare this game with past encounters. It will be a very difficult game, but one that hopefully the public can enjoy.

“It has been an enjoyable last couple of weeks, but the time for reflection isn’t now. We’re still in the middle of a season and we’ve the semi final of the Heineken Cup to look forward to. The focus (within the squad) is strong. We know that what has happened before will count for little if we don’t win on Sunday.”