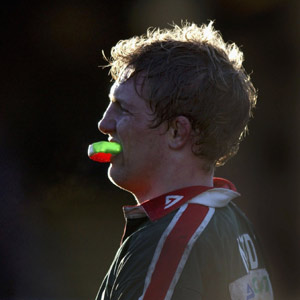 British and Irish Lions flanker Lewis Moody, who became the first player to be sent off playing for England at Twickenham last weekend, will miss the last four rounds of the Heineken Cup Pool stages after being given a nine week suspension.

It means Moody will miss Leicester Tigers’ back-to-back games against the reigning Celtic League champions the Ospreys in December and the clashes with French teams Stade Francais Paris and ASM Clermont Auvergne in January.

Moody was sent off for punching late in the game against Samoa, along with clubmate Alesana Tuilagi. The Samoan wing was banned for six weeks and will therefore also sit out the games against the Ospreys.

Moody’s suspension will finish the week before the RBS Six Nations Championship begins, leaving the way clear for him to be considered to return to England’s colours for their game at Twickenham against the reigning champions Wales on Saturday, 4 February.