Tigers happy to be home 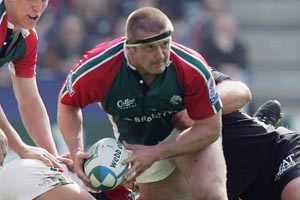 The 2001 and 2002 cup winners will face their fierce English rivals and 1998 Heineken Cup winners at the 32,000-seat Walkers Stadium little more than a decent punt away from their Welford Road home and on the back of their 19-12 “dress rehearsal” weekend win.

“I am glad we did enough in the Pool stage to earn a home quarter-final and that we don’t have to travel for the tie,” said Rowntree, who toured South Africa in 1997 and New Zealand in 2005 with the British and Irish Lions.

“In fact I would be happy to play anyone, be they another English club or a team from another country, as long as we are at home.”

The clash, with an away semi-final against either Biarritz Olympique or Sale Sharks the prize for the winner, will be the 158th match between the Tigers and Bath with the Tigers ahead 94-52 and 11 matches ending with honours even.

“It is quite ironic we are playing our long standing West Country rivals and I have incredible and enormous respect for them.

“Bath have always been a very good team playing expansive rugby, not a forward-orientated side, and that is particularly true under Brian Ashton.

“That said, they can only play an expansive game if the forwards are doing their job and they have an outstanding second row pairing in

Rowntree knows both the delight and the despair of Heineken Cup finals and admits there is still hurt from the 1997 occasion at the Old Arms Park in Cardiff.

“I just love this tournament, it is so special with very special games that are ones you certainly remember,” said Rowntree, who will celebrate his 35th birthday next month.

“Back in 1997 when we lost in the final to Brive it was a total mess-up. We were quite complacent going into the game and from the first minute they wanted it more than us.

“The rest is history but it was tough to take and we all learnt a lot from the experience. Quite a few of us went on to lift the Heineken Cup either once or even twice and that was just fantastic – those were great days.

“The matches this season against Stade and Clermont Auvergne in particular have been incredibly tough but the big thing now is that we are home in the quarters and looking forward to facing Bath on Saturday.”