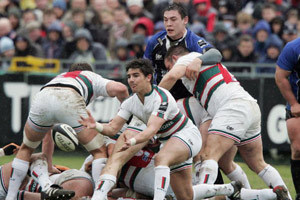 The two sides will face each other again on Saturday at The Walkers Stadium in the Heineken Cup quarter-finals but played out a tense and tight domestic affair in torrential rain at Welford Road.


It was the kicking accuracy of Andy Goode and a try from Leon Lloyd which gave the crucial points to the Tigers. Bath were unable to cross the Leicester try line and had to settle with 12 points from the boot of fly-half Chris Malone.

The win will provide a crucial psychological boost to the Tigers, but could serve to inspire Bath ahead of this weekend’s make-or-break quarter-final.

The two English heavyweights will now settle into the serious preparations for what is the biggest game of their season so far.

Victory will propel them into the final four of Europe’s hardest rugby competition, and an away match against either Biarritz Olympique or European Challenge Cup holders Sale Sharks.

Leicester and Bath are no strangers to this competition, or indeed each other. Bath raised the Heineken Cup in 1998, while Leicester were back-to-back winners in 2001 and 2002.

There have been 157 previous meetings between the sides, incredibly though, they have never met in the Heineken Cup.