Thousands set for Trip to Toulouse 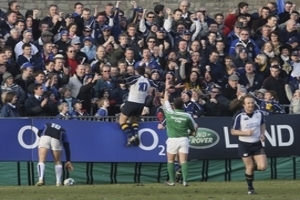 Leinster have confirmed that they will bring a record for the province of 3,000 plus fans to Toulouse for the clash of Brian O’Driscoll’s side with three times champions Toulouse on Saturday, 1 April in the 37,000-capacity Stade Municipal.


After going on general sale in Dublin only last week, over 3,000 tickets have already been snapped by Irish fans, an increase on the estimated 2,000 who travelled with the Blues to play Bath in Round 6.    Toulouse have also reported huge demand for tickets for what looks set to be another sellout match and a truly colourful occasion for fans.

Leinster Chief Executive Mick Dawson is delighted with the level of interest in the game and said, “There has been huge interest in tickets for the Toulouse game and it promises to be an incredible occasion. I am delighted that so many Leinster supporters will be making the trip to France in April, he said”

“This is a massive and welcome vote of confidence by our loyal following in the team” he added.

This will be the fifth time that Leinster will meet Toulouse in the Heineken Cup.  Toulouse currently lead with four wins in their favour and both sides will be fighting for a coveted semi-final spot.

For tips for travelling fans check out ERCrugby.com’s Off the Field Guide to Toulouse.