This is the big one – Contepomi 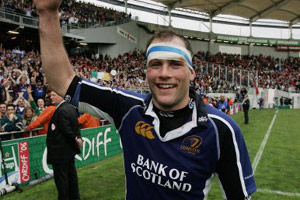 and the fascinating head-to-head with arch Irish rivals Munster at a packed Lansdowne Road on Sunday (15.00).

But the Argentine fly half, the tournament’s leading scorer this season with 125 points and joint top try scorer with six, insists the job is only half done for the Celtic League leaders, who beat Llanelli Scarlets 30-22 at the weekend.

“It is only a case of so far so good,” said the 28-year who got his first taste of Heineken Cup action with Bristol before moving to Ireland.

“Our desire is to get to Cardiff for the final but the semi-final is a huge game for Leinster because we have never been in a final. However, if we can perform to our best it will take a very good team to beat us.

“It is very clear it is going to be a huge game in Ireland – and the Heineken Cup – because the winner will go through to final in Cardiff next month. We have given ourselves the opportunity to reach the final but there is still long way to go and the semi-final is going to be really tough.

“Sure we know each other pretty well but with all the modern technology available it is no great trick to analyse how teams play and it takes something special to spring a surprise.

“We know we will need a strong forward platform – just as we did when we played Bath and Toulouse – and if we match them up front we can play some good rugby in the backs.”

After a stuttering start to their Pool 5 campaign with a home 22-19 defeat by Bath Rugby, Leinster squeezed into the knock-out stages as second best runners-up and with that the No 8 seeding and a trip to defending champions Toulouse in the quarter-finals.

“We did not start that well and many people did not expect us to reach last rounds but we believed in ourselves,” said Contepomi. “When the big games came we performed and in Round 6 game against Bath we knew that if we won we would go through but that if we lost we were out.

“Playing away you have to perform to get good results and at Leinster we don’t just go for the result because we know that if we don’t play well it won’t happen. Now it is a case of focusing on trying to perform on Sunday.

“The performance and result in Toulouse was the highlight of the season so far. Going to France to play the reigning champions in their cathedral of rugby – and with the home record they have – and coming away with the right result was special.

“The French fans can start out quite hostile to visiting teams but the Toulouse supporters ended up clapping us off the pitch and onto the bus because they wanted us to know that they appreciated their team had been beaten by a team who had played good rugby.

“Perhaps people were expecting Toulouse to be going back to Cardiff 10 years after they won their first title – that seemed to be the script – but on the day the better side won.

“I am enjoying myself with Leinster because of the ambitious style of rugby we are playing and now we are totally focused on the semi-final against Munster.”