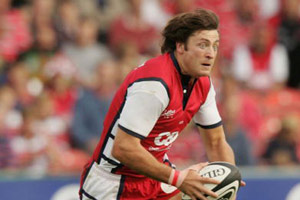 Rob Thirlby will start at full-back for Gloucester in Sunday’s European Challenge Cup final against London Irish at the Twickenham Stoop (12.15pm)…

He will replace Olly Morgan who has a fractured jaw and Jon Goodridge, who underwent surgery on his left shoulder last Friday to remove a bone spur.


“It’s unfortunate for Olly Morgan that he got injured when he did but now it’s a great opportunity for me – I have waited for a chance for a long time and it’s fantastic that it will be in a final, in the last game of the season.

“Any final is a big occasion and everybody wants to win and do the best they can. It doesn’t matter if it’s the Hong Kong Sevens, the Premiership final or a European final, we are desperate to win.

“Mike Anthony has kept me in good shape and I am relishing the opportunity.”

Thirlby’s last start was against Bucuresti in January and he has not played at full-back since October against Bristol in the Powergen Cup.

“We have no other options at full-back because of Olly’s injury and an operation to Jon Goodridge last week. But Rob Thirlby’s attacking flair is ideally suited to this weekend.

“Rob’s inclusions maintains our intentions to be attacking and I think it is a very exciting prospect to see him involved in our back line.”

Thirlby’s inclusion is the only change to Gloucester’s line-up that was narrowly defeated in their last Guinness Premiership match against Wasps earlier this month.

James Simpson-Daniel, who has eight tries in five European games this season, and Mark Foster have been named on the wings, while Anthony Allen and Mike Tindall form the centre partnership.

Ryan Lamb, who has made only seven appearances this season, starts at stand-off and Peter Richards is named at scrum-half.

The forwards also have a familiar look with Patrice Collazo, Mefin Davies and Jack Forster in the front row, Jonathan Pendlebury and Alex Brown at lock and Peter Buxton (captain), Andy Hazell and James Forrester in the back row.

“Our only thought is about winning the game,” Ryan added. “Over the last eight or 10 months we have evolved a group of people who want to take Gloucester forward.

“Nothing seems to phase this group – it doesn’t matter of it’s a game at Welford Road or Sale – they just have bags of enthusiasm and confidence and take everything in their stride.

“We have to manage the expectations and ambitions but it is a hugely invigorating group of players to be around and it will be great for them this weekend.”

The bench will be made up from Olivier Azam, Gary Powell, who will return from a shoulder injury, Luke Narraway and Adam Eustace up front, while Haydn Thomas, Ludovic Mercier and James Bailey are the three-quarter options.