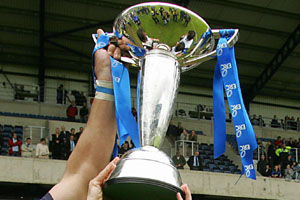 ERC are delighted to see the level of interest in the European Challenge Cup final which is great for the tournament and for the participating teams.

There has been some speculation with regard to the final venue and I would like to take this opportunity to outline the process and reasons why the Twickenham Stoop was selected.


The objectives set by ERC at the start of the tournament was to give the European Challenge Cup final the best opportunity to have a great atmosphere with a  capacity crowd – live on Sky Sports – and to therefore put the tournament in the shop window in the best possible light.

The process of selecting the venue began several months ago.  With the above objectives, ERC worked with Premier Rugby, the Clubs involved and the RFU in identifying potential venues and following the support of the ERC Board the Twickenham Stoop was selected.  We have been in detailed discussions with the Clubs since before the semi-finals so as to be in a position to confirm the final venue with enough time to build a memorable occasion for the teams and their fans.

Venues such as Welford Road, Franklin’s Gardens and Kingsholm were discounted because of the potential of Leicester Tigers, Northampton Saints and Gloucester Rugby still being in the Heineken Cup and European Challenge Cup tournaments at the time of the final.  As the European Challenge Cup currently does not have the same commercial weight as the Heineken Cup, ERC and Premier Rugby discounted football grounds with a view to keeping the revenues from the final within the game of rugby.

The newly redeveloped Twickenham Stoop stadium, located near to Heathrow and London, offers accessibility, excellent facilities, a staff that are familiar with the European Challenge Cup and a capacity 12,500 crowd at the final would help create a wonderful atmosphere for fans in the ground and watching on television.

We are currently finalising details with both Gloucester Rugby and London Irish and I can confirm that both teams will receive a minimum of 5,500 tickets each which they will distribute to their fans.

The European Challenge Cup is currently dominated by English Clubs, which reflects the strength of the Guinness Premiership, but the French Clubs would point to their early domination of the tournament. With the European Challenge Cup’s third format change in three years, we at ERC must work hard with the Clubs to build the event and attracting new sponsors is critical to this.  A memorable sell-out final at the Twickenham Stoop between two teams and their passionate fans will greatly help that process.

I would like to wish both teams every success in their preparations for this European Challenge Cup final and look forward to another great tournament finale at the Twickenham Stoop.