The 11th Heineken Cup final … Did you know? 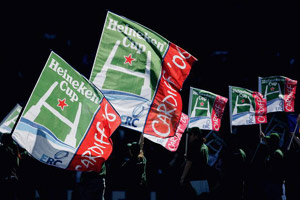 Swot up on your Heineken Cup final facts & stats…

A total of 18 players have appeared in three Heineken Cup finals before this weekend.  See ERCrugby.com to find out who.

The 74,000 plus capacity crowd on Saturday will take the attendances for the 11 Heineken Cup finals through the half million barrier to approaching 564,000 fans.

This will be the second Irish-French final – Ulster taking the trophy in 1999 when they beat Colomiers 21-6 in Dublin.

David Wallace is the only Munster player to score a try in a Heineken Cup final, crossing against Northampton Saints at Twickenham in 2000.