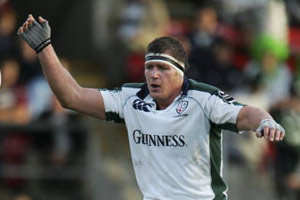 London Irish have announced their skipper

London Irish have announced their skipper, Ryan Strudwick will be leaving the club he has represented for eight years at the end of the season…

Over the past eight seasons the 32 year old  has made 210 appearances for Irish and has scored 15 tries. He has been club captain for the past three seasons and led the club to the Powergen Cup victory in 2002.

“I am sorry that my career at London Irish is drawing to a close,” Strudwick said. “The physical demands of playing in the Guinness Premiership and Europe are increasing with each passing season and that takes a heavy toll on your body. With the club competing at the top end both in this country and in Europe it is unlikely that things are going to get any easier for senior players like myself so it is time to take stock and move on to a less stressful role.”


Brian Smith, Director of Rugby of London Irish praised his out-going captain.”Ryan Strudwick is an exceptional rugby player and person. I knew of him long before I came to London Irish and was aware of the high regard with which he is held throughout the professional rugby playing community in this country and abroad.

“He has been a remarkable servant of London Irish over the past eight years and ranks among the great ambassadors of the club and the game. While there will be an opportunity to say a proper farewell before he leaves at the end of the season I want to take this opportunity to express publicly the gratitude of the directors, management, players and supporters for all he has done.”