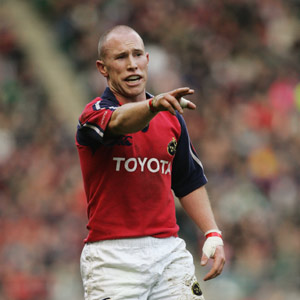 
And Stringer admitted that was a “special” win following final defeats in 2000 and 20002.

The Ireland scrum-half said: “This has been a long time coming and it’s so much more than I ever dreamed of.

“This is something special and it’s for the fans as well. They have given us so much and travelled so far over the years. The whole of Munster and more are here and this is for them.

“We have waited so long for this and I don’t think you could have asked more of what the guys gave. This is special.

“It’s just about an honest effort from numbers one to 22. Everyone gave 100 per cent and at the end of the day we’re delighted with the win.

“We didn’t think about what happened here (at the Millennium Stadium) in the past. We forgot about that as soon as the final whistle went. It was about building for the future and dealing with what’s in front of you – not what is behind.”

Stringer went over just before half-time after Biarritz wing and try-scorer Sereli Bobo left the blindside unmarked at a scrum ten yards from his own try line.

And that proved to be enough as Munster held on for an historic win.

Stringer said: “It was something off the cuff. I saw the wing had gone in field and left a gap for me. You look up and if something is on then you have a go for it.”