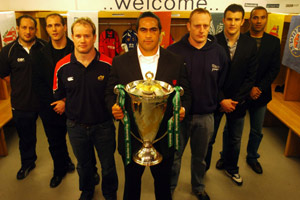 Players from the eight teams left in the competition were left holding their collective breaths as they waited to see who they would face in the semi-finals, should they progress past the quarter-finals.

But that draw has also thrown up the possibility of an all-Irish semi final, should Leinster upset the odds in Toulouse, and Munster continue their incredible record at Thomond Park.

“The whole province was wild on Saturday night [when Munster beat Sale to qualify for the quarter-finals] it was a great day for the supporters,” said Munster’s Frankie Sheahan.

“The quarter-final is a huge game for us and there will be plenty of people in Munster shouting for Leinster against Toulouse to set up a great semi-final.”

Leinster’s Keith Gleeson was also looking forward to the potential tie. “I think if we beat Toulouse we will have earned ourselves a home tie but the match against Toulouse promises to be a great game of rugby.

“This will be the second time that Munster will be looking to Leinster for a favour. We have had a couple of ups and downs in Europe over the last couple of years, but last Saturday’s game was another step in the right direction.”

Sale Sharks will travel to Biarritz for their first ever appearance in the Heineken Cup quarter-finals. The Sharks are holders of the European Challenge Cup, and lead by former French star Philippe Saint Andre, will be looking to upset the odds and earn themselves a semi-final against Leicester Tiger or Bath Rugby

Sharks stalwart Peter Anglesea said: “It’s a new environment for us, we have never been this far.

“We got a lesson from Munster at the weekend as to how difficult this competition can be; now we have to go another hostile environment in Biarritz.

“It’s going to be a very difficult game, Sale have plenty of French players and a French coach so we will know a lot about each other.
“The prospect of Leicester or Bath will be an incredible challenge.”

Leon Lloyd, twice a winner of the Heineken Cup said: “There is a great history between Leicester and Bath but it is the first time we have met in Europe so will be a massive game.
We would have preferred a home draw for the semi-final but it all comes down to who performs on the day.”

And Bath Rugby’s David Barnes responded by saying: “We have shown with our results this year that we can compete in Europe. There is lots of history between the two teams and there are no easy games in this competition, everyone has a chance on their day.”