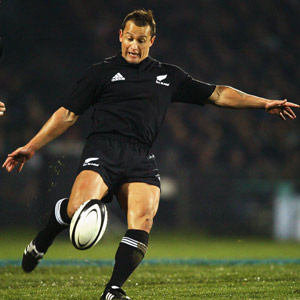 Northampton Saints fly-half Carlos Spencer has fought back to fitness for this weekend's European Challenge Cup quarter-final after he took a knock to the leg last weekend... - 29/11/2006 12:17

At the start of the week, it was very doubtful the former All Black would be fit to play against Worcester Warriors on Saturday, after he limped off the pitch during Saints’ victory over Newcastle Falcons at Kingston Park, but swift treatment from the club’s medical team has accelerated his recovery.


Head coach Paul Grayson said: “Carlos is two or three days ahead of where we expected him to be. No-one likes to see anyone hobble off but technology being what it is, our physio department being what it is and Carlos looking after his body well meant his post-game care was very good and he has come through.”

Scrum-half Mark Robinson was also pleased to hear that Spencer was fit to play: “To have as few changes as possible is a positive. It is good to have continuity. Carlos is on great form and he has been running the game well.”

Saturday’s game at Franklin’s Gardens – KO 3pm – will be the fourth time Saints have played Worcester this season after meeting them in the Powergen Cup back in September, at home in the league in October and away in January. The Warriors beat Saints by one point in October with former Saints fly-half Shane Drahm scoring all 22 of Worcester’s points. Saints beat Worcester both times they visited Sixways.

Robinson said: “Worcester and Drahmy did a number on us back in that home game but this is a one-off game and a fantastic opportunity for us to get back into the Heineken Cup.”

Around 10,000 tickets have been sold for Saturday’s game, which is not part of the season ticket deal, and Grayson has urged supporters to get behind the team for this crucial game.

He said: “We need our supporters to be the 16th man. We have had full houses all season and we will really need more of the same for this game too. When Franklin’s Gardens is full, there is no better place to be.

“All we can do is continue with what works well for us; however, but we do need to focus on Worcester and not think about the league this weekend. All the clubs left in this competition will want to win it. We would love to qualify for Europe through the league but if you win the European Challenge Cup you get into the Heineken.”

There are two changes to the team that played against Newcastle last weekend with Mark Soden coming in to replace Mark Easter at No 8 and Chris Budgen, back from Army rugby training in South Africa, replacing Simon Emms on the bench. Neither Easter nor Emms are registered to play in the European Challenge Cup.

All three of Saints’ extra players – Pat Barnard, Robbie Kydd and Paul Tupai – permitted to be added to the European register for the quarter-final stage have been utilised in the squad.