“Sold out” signs ready to go up at Millennium 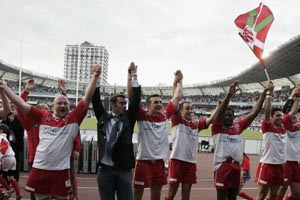 ERC are expecting to raise the ‘Sold Out’ signs at Cardiff’s Millennium Stadium when the 11th Heineken Cup final takes place on Saturday, 20 May.

More than 58,000 tickets have already been snapped for the showpiece occasion and tournament organisers ERC have ‘reserved’ 15,000 tickets for the two finalists for distribution through the two clubs to their members and supporters.


It means the only remaining tickets available for public sale are in the *corporate facilities – with only a few hundred of them available in hospitality boxes and hospitality suites.

A huge surge of interest following Leinster and Munster’s Heineken Cup quarter-final wins in particular led to a wave of ticket sales and the ‘Sold Out’ signs being put on stand-by at the Millennium Stadium more than six weeks ahead of European club rugby’s grand finale.

The semi-finals will see French champions Biarritz Olympique Pays Basque meet the 1998 champions Bath Rugby in San Sebastian on Saturday, 22 April, and Leinster and Munster clash in an ‘All Irish’ special at Lansdowne Road, Dublin the following day.

Both of these games are heading for sell-outs – 31,700 in San Sebastian and 47,800 in Dublin – and the likelihood is that the 15,000 earmarked for each finalist will be snapped up very quickly.

“The interest since the quarter-finals has been phenomenal, with more than 11,000 tickets being sold on the Sunday of the quarter-final weekend with the confirmation of the semi-finalists,” said ERC Chief Executive Derek McGrath.

“Almost all of the tickets available for public sale have now gone and we are all looking forward to what promises to be a fantastic festival of European rugby both in the days building up to the final and the day itself.  We are working hard with our final partners in Cardiff to ensure that the thousands of fans who travel to the Welsh capital will enjoy a memorable Heineken Cup final weekend, on and off the field.
“We had capacity crowds at all the quarter-final matches last weekend with a total of 150,000 going through the turnstiles in Dublin, Leicester, Toulouse and San Sebastian.”

It will be the fourth Heineken Cup final to be staged in Cardiff, the 74,600 who packed the Millennium Stadium in 2002 for the Leicester Tigers v Munster final a tournament record.

“We are delighted to be hosting the Heineken Cup final for a fourth time in Cardiff and the news the game is set to be a ‘sell out’ will mean we will have exceeded 600,000 rugby fans at the Millennium Stadium this season,” said Millennium Stadium chief executive Paul Sergeant. “It promises to be another spectacular sporting occasion for the stadium, Cardiff and Wales and we are looking forward to receiving at least one team from across the Irish Sea and either a French or English side.”

*Corporate sales are being handled by the Millennium Stadium (0044 2920 822410). ERC’s ticket agents, Ticketmaster, have now completely sold out of their allocation.