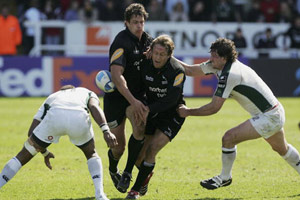 Newcastle director of rugby, Rob Andrew, was left to rue the one that got away on Sunday at Kingston Park…

…as his side’s late comeback saw them fall just short of a place in the European Challenge Cup final.


Trailing 27-3 to London Irish with only 20 minutes left to play, a three-try blitz from the hosts left victory within their grasp going in to a tension-filled period of injury time, before the final whistle deprived them of the crucial winning score at 27-22.

“To win from 24 points down would have been some comeback, and to be honest I still thought we would do it right until the very end,” said Andrew afterwards.

“We were held up over the line from a line out, but still had a five-metre scrum. We probably took the wrong decision in getting it wide as quickly as we did, but the players never gave up and London Irish were on their feet in the last 20 minutes with the pace we put on the game.

“It was a great comeback, but too little too late as we paid the price of gifting them some sloppy tries earlier on.”

Having allowed the Exiles four tries before the hour mark, Andrew said: “The problems we created for ourselves in the first half were just too much to overcome, but it was a damn good effort in the second half and we nearly did it.

“It was a peculiar game in many senses, but one that I thought we were capable of winning,” he added.