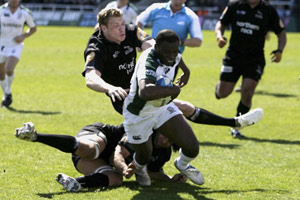 London Irish coach Brian Smith pointed to his side's brilliant line-out performance as the reason behind their march into a first European Challenge Cup final. - 29/11/2006 12:17

London Irish coach Brian Smith pointed to his side’s brilliant line-out performance as the reason behind their march into a first European Challenge Cup final.

Having led 27-3 with four tries after 70 minutes, Smith saw his side concede three tries as Newcastle Falcons flew back into the contest. But Irish held out in the end to book their ticket to meet Gloucester at the Twickenham Stoop on Sunday, 21 May.

“We were very happy with our defensive line-out performance when we were really on the rack in the last 20 minutes,admitted Smith. “We turned it over as couple of times, which was very important, because we had no possession in that final 20 minutes – it’s to Newcastle’s credit that they ran us so close.”

Newcastle director of rugby Rob Andrew brought on England World Cup hero Jonny Wilkinson in the first half and saw his side almost sneak victory at the death.

“There is some debate about whether we scored from that lineout at the end and even when we didn’t, I was confident we would score from the scrum – but we didn’t and we probably chose the wrong option there.”