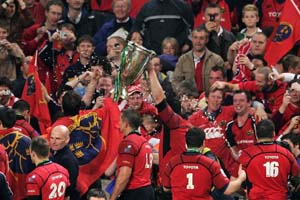 Frankie Sheahan is poised for his first action for nearly a year after being named in the Munster squad to face Leicester Tigers on Friday night. - 29/11/2006 12:11

Frankie Sheahan is poised for his first action for nearly a year after being named in the Munster squad to face Leicester Tigers on Friday night.

Declan Kidney has named his starting fifteen ahead of Friday night’s clash with Leicester Tigers in Musgrave Park (KO 7pm).  Frank Sheahan, who injured himself in the opening round of the Heineken Cup last October, makes a welcome return to the side.


The Ireland hooker has recovered from a serious neck injury sustained last October and looks set for a run-out at Musgrave Park (1900 BST).

Sheahan will be surrounded with youth as most internationals are unavailable.

Also back in action is former All Black great Christian Cullen. Cullen missed most of last season due to surgery and is back with the Heineken Cup champions on a one-year contract.

Welsh international Chris Wyatt, a summer signing from the Scarlets, has also been named by coach Declan Kidney who has called on a number of Academy players plus a few club representatives to his depleted squad.