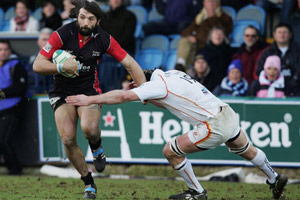 The Sharks, Bath Rugby and defending champions Toulouse are safely through to the last eight but, with home advantage in the quarter-finals still at stake, they still have plenty to play for against Munster, Leinster and Llanelli Scarlets respectively in Round 6.

The Sharks made it five from five with their home 30-10 victory over Newport Gwent Dragons, with England star wing Mark Cueto
snapping up two of their bonus point-earning four tries.

Now they travel to Thomond Park hoping for another first – becoming the first team in 23 attempts to win a Heineken Cup match at the ground. Munster are defending an overall unbeaten home record of 27 tournament matches.

“These are uncharted waters for us – normally at this stage of the tournament we have just been playing to save face – but this is what the Heineken Cup is all about,” said Cueto.

“Everyone keeps telling us that Munster have never lost at home but records are there to be broken and, while we have qualified for the quarter-finals, it would be a dream come true to go through the group stages unbeaten.

“I am relatively familiar with a number of the Munster players as a result of the Lions tour to New Zealand last summer, particularly Paul O’Connell, and Munster clearly missed him when we beat them 27-13 at Edgeley Park in Round 1 back in October.

“But right now he is certainly proving that he is not only an outstanding forward but is also scoring tries like a threequarter and is definitely one for us to watch out for.

“We saw Munster’s match at Castres Olympique on TV last Friday night and Munster have obviously hit form at the right time.

“On a personal note I was glad to end my try drought with two tries against a spirited Gwent Dragons side and, although they may be bottom of the group, they made us fight for the win and often made things difficult for us.”