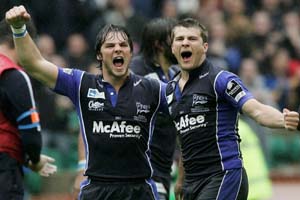 As winners of the English premiership

As winners of the English premiership, Sale Sharks have secured the top English seed for the 2006/07 Heineken Cup tournament.

Sale Sharks upset the odds by clinching the Guinness Premiership title courtesy of a well-taken 45-20 victory over Leicester Tigers in the Final on Saturday, thus becoming the first side – in four attempts – to be both League leaders and Champions.

As the 2005 European Challenge Cup champions, and 2006 Heineken Cup quarter-finalists, the English champions have their sights set on Europe.

“It has been a long journey with highs and lows, and this is a great achievement for us,” said England star Hodgson, who kicked 23 points in miserable conditions.

“We want to progress as a club and be a dominant force in Europe, and this is the first step in that direction.

“The test will come next season, and whether we can continue in the same vein.”